The 9th of March is an important date in Egyptian history. On that day in 1938, the first President of Cairo University, Ahmad Lutfi as-Sayyid, resigned in order to protest against the governmental decision to dismiss Taha Hussein from his position as the Dean of the Faculty of Arts. Freedom of thought and expression were then progressively banished from the campus of Cairo University and this situation  was to last until present day.
During the last three days, students and professors have been openly protesting against their superiors. They want to push the president and the deans –representatives of Mubarak’s regime– to resign. However, the president just decided to maintain Cairo University closed for some more days until everybody might forget about the issue…
When I came back from the campus, at around 8 pm, Midan at-Tahrir was empty. Soldiers with machine guns were patrolling the square and a group of around sixty men had gathered in a corner of Qasr al-Nil Street. They were gazing to the centre of the circle where a few hours earlier the “inner-circle of the revolution” had still been operating. Officers of the traffic police in their black winter-uniform and armed soldiers were circling around them.


The “utopian city of liberation” had completely vanished. The core building of the Kafkaesque authoritarian administration –the Mogamma– had recuperated its sinister totalitarian aspect. It had suddenly, reappeared out of the shadow of the tents under the shelter of which freedom had been born. Was this a dream? Are we to wake up all of a sudden from this short ecstasy of liberation?
The traffic police seems to have recuperated their former positions and are to be seen everywhere in down town. Curfew is –starting from tomorrow– back on at 8 pm. The reason why? The baltagiyya, as usual…
Posted by Dr. Eliane Ursula Ettmueller at 10:55:00 pm No comments:

On the 8th of March –International Women’s Day–  the Confederation of Egyptian Women’s Organizations (تحالف المنظمات النسوية المصرية) convoked, like every year, a gathering. However, this time they decided that they wanted to make their demonstration march from the building of the journalists’ syndicate, along Talaat Harb Street, to the Tahrir Square in order to unite there with the steady residents of the “inner-circle” of the revolution.
Demonstrations currently happen on a daily basis. The Egyptians need to talk and to scream their thoughts out aloud. People openly lament to have lost thirty years of their lives to a system which had curtailed all kinds of initiative. It seems that now, avalanches of demands and projects which had been held back over the last three decades are continuously discharged into Liberation Square.
Yet, not everybody is happy about the ongoing obstacles of the traffic. To be stuck for hours in the traffic jam and finally not to reach appointments is everybody’s fate at the moment. Nobody exactly knows when and where demonstrations are taking place. Where the traffic police is missing, citizens try to help to put some order back into the chaos of desperately honking vehicles. Sometimes groups of people stop cars in order to tell the drivers which streets presently are closed and which alternative way they might choose instead.
For the women’s rights demonstration, around fifty women and men had gathered in front of the building of the journalists’ syndicate. They assembled on the stairs while a lady handed out Egyptian flags to the participants. Then they briefly posed with their banderoles and posters for the photographers and journalists form the television and finally walked pacifically in their little circle towards Tahrir Square.
Very prominently, one of the organizers walked in front with a bunch of flowers in her arms for the martyrs of the revolution. The attractive tall women with her long black hair and white-framed sunglasses moved proudly on her high-heeled boots and continuously addressed the watchers with a charming smile. “Every man has to congratulate every woman on this day because this is the International Women’s Day!”, she kept repeating.
The small group passed in front of the Swiss embassy, where the very young looking soldiers on guard,  with their enormous machine guns, curiously gazed at them. On their way, the protestors were asked about their demands by the people on the streets. Some of the men who were watching the demonstration concluded that they did not really understand “the problem”. Others were wondering what “those foreigners” wanted from the revolution. And finally a group of adolescents yelled that the Egyptian women are the best and most beautiful in the world anyway. 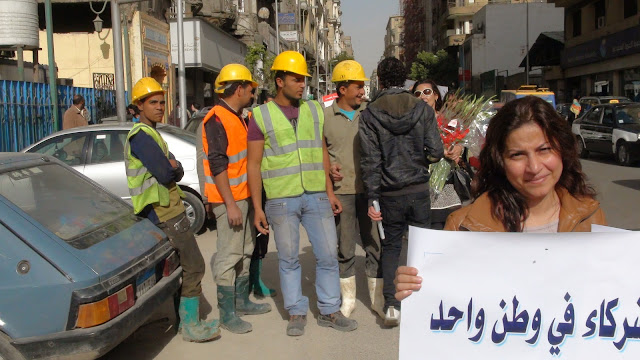 A group of construction workers, with cigars between their lips, asked one of the girls who was carrying a poster with the line “Equality between Women and Men” what this was all about. She bravely turned around, held up her banner towards them and tried to give a short explanation. Unfortunately, they did not look very convinced after she had walked away.
On the Tahrir Square, after the party had made their way through the honking cars, they were eagerly welcomed by the guardians of the steady revolution. “Rights now not tomorrow!”, they were chanting. And the women’s rights protestors answered with the slogan: “We want a civil state! Neither a military dictatorship nor a theocracy!”
Posted by Dr. Eliane Ursula Ettmueller at 12:54:00 am No comments: