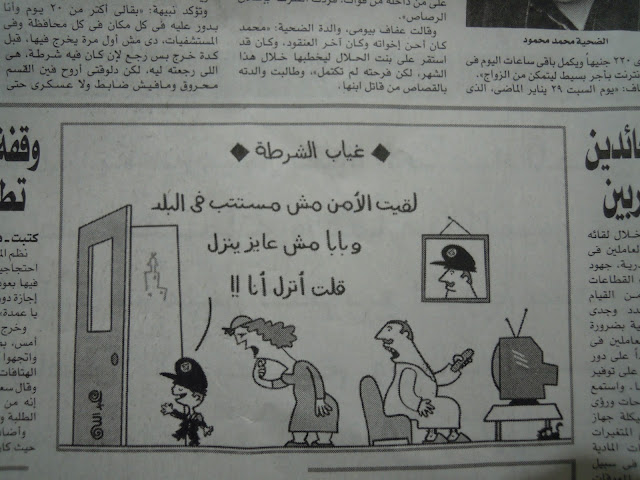 The issue of Masri al Yom, published on the 2nd of March, starts with the heading: “The Banks are Starting to Freeze Mubarak’s Accounts and the Ones Belonging to the Members of his Family…” The recently overthrown president is then –one might already say “as usual” –accused of corruption and dictatorial ruling.
Very much to my surprise, after turning the cover-page, I immediately spotted the painted bust of a very familiar personage: Khedive Ismail (r. 1863-1879). This column on the head of the second page of the journal is usually dedicated to historical memory.
The same day as the one on which the newspaper is issued is linked to a date in the past which witnessed an important event in Egyptian history. The title of the column therefore consists of a date, here spelled: “1895.3.2”. Then the explanatory subtitle reads: “Decease of Khedive Ismail, the Founder of Modern Egypt.”
In the article the extravagant despot who was ruling Egypt at the end of the 19th century is highly praised for his uncountable achievements in modernizing the country. According to the brief text Khedive Ismail traveled to Italy after his deposition and finally died in Istanbul. Not a single word is said about the reason why; neither is his “travel to Italy” called “exile”!
The Khedive Ismail truly had Cairo and Alexandria re-constructed, theaters opened, the railway established, the Suez channel constructed and schools and scientific institutions built. Nevertheless, his financial policy of big-spending and taking up loans from English and French creditors drove him to bankruptcy. His tax-system became so cruel that the population on the country-side starved massively if they were not sent to prison and tortured for not being able to pay. Ismail’s merciless fiscal policy nevertheless –mainly due to corruption– did not succeed to pay back the loans and the financial dependence from the European powers finally was one of the main causes of the British occupation.
During his reign, the Khedive was strongly opposed by journalists like Yaqub Sanua, Adib Ishaq or Abdallah Nadim. In 1879 he was finally replaced, unfortunately not because of a national revolution, but due to the pressure the European powers had put on the Sultan of the Ottoman Empire.
Now, 116 years after his death, after a quasi non violent national revolution, the Khedive Ismail is finally put on the pedestal of a founding-father of modern Egypt. In this example Benedict Anderson’s idea of how communities retroactively “imagine the nation” or better “reinvent a national history”, becomes pretty obvious…
I wonder in which way history will be told 116 days after Mubarak’s death? Will he reappear as the poor Mubarak who heroically fought against Israel, finally deposed for a bit of corruption and completely deprived of his honor?
An-Nukta: Mubarak Joke of the Day
Mubarak enters paradise and meets Sadat and Nasser. They then discuss the means by which they were killed. Nasser tells his companions that his decease was caused by poison. Sadat then explains that a shouting had made him die. Mubarak thinks for a while and then concludes that Facebook dug his grave.
Posted by Dr. Eliane Ursula Ettmueller at 12:42:00 am No comments: