On 25 Mars 2012, the salafists challenged the liberals in front of the Théâtre Municipal in Tunis. The theatre-workers gathered under the banner: “the people want theatre!” while the salafists assembled in the middle of the street in front of them and chanted: “the people want an Islamic state!”
Meanwhile in the Café l’Univers people were having coffee and watching bearded teenagers passing by who shouted at them: “you heretics!” However, the former turned around calmly, laughed at them and answered back: “yes and you guys are very good Muslims!”
Posted by Dr. Eliane Ursula Ettmueller at 8:31:00 pm No comments:

From Egyptian to Egyptian: Work Is Our Only Solution! 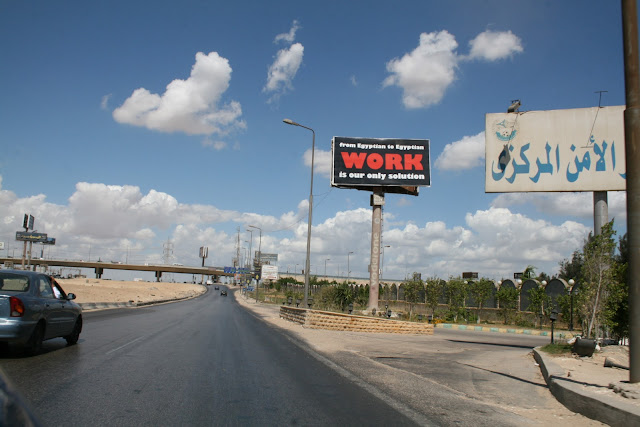 When I met my friend Ahmed (name changed) who was carrying a big hammer on his shoulder while making his way to the Tahrir Square, I first thought he might want to visually express his adherence to the communist ideology. As a matter of fact, I had never discussed party politics with him before and did not really know which part of the political landscape he was actually belonging too. I greeted him with a surprised and joyful “Ezzaiyyak” (how are you), as we had not met for a long time and immediately started to push his leg about his new membership in the workers’ movement. He smiled in the warm light of the setting sun and made me understand that I was very much mistaken. Happily he declared that he wanted to go and destroy the Israelian Embassy. I laughed, weighed the hammer in my hand and did not believe a word of what he said.
In this moment, when the heavy iron lay on my fingers, I was completely unaware of the fact that this instrument might be among the ones which were to force the initial stroke to the outbreak of a major war in human history. Ahmed disappeared among the crowd of demonstrators on the Tahrir Square.
The (more ore less) weekly gatherings on the famous place of liberation have now turned into a special kind of folk festival where popcorn and jus-sellers make their living. Also salesmen of handy little sowing and shaving equipment gather for the feast and spread out their towels on the floor among the ones who are trading with nationalistic icons. Black and white pictures of Osama Bin Landen are sold next to Nasser’s multiple photographs. People gather in small groups among artists or party-leaders and charismatically scream their message at each other without forgetting to put it into rhyme-prose or to formulate it as a joke (nokta).
However, later on last night the panorama changed completely and the ones who were following the news on the Al-Jazeera Channel were turned into witnesses of a major transgression of international law. An emotionally overloaded crowd driven by an exaggerated nationalist enthusiasm started to attack the Israeli Embassy in Giza. First the flag fell down from the 40th floor of the high building and suddenly it illuminated the sky in flames. The armed forces, which were “protecting” the building, seemed to have suddenly lost all their powers with which they had threatened the population on television the day before. The youth managed to sack the embassy without major obstacles. Papers were falling from the sky like snow while the flat looked like the open mouth of a fire-spitting, dark dragon. The crowd celebrated and held their stolen trophies to the cameras, completely unaware that they were not the glorious actors but the mere tool of a cruel game of power-policy. One only remains with the Christian task to ask the powerful to forgive these children, as they were innocent and did not know what they were doing…
Posted by Dr. Eliane Ursula Ettmueller at 2:44:00 pm No comments: 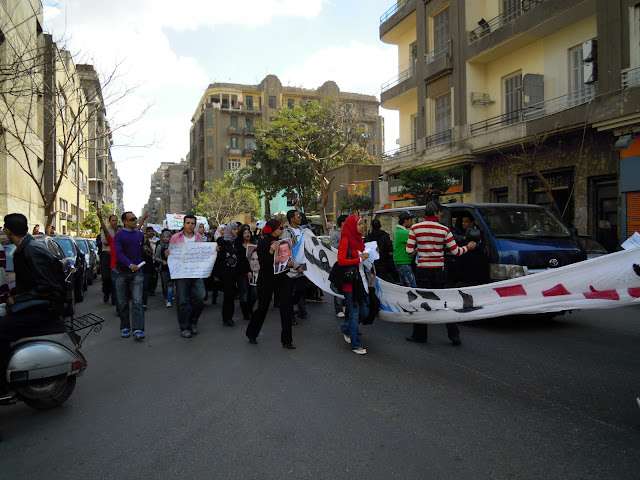 In front of the old main building of the American University in Cairo, a very uncommon demonstration took place this morning. About fifty people displaying big posters of a handsome, radiant Mubarak gathered for a pro Mubarak walk. Even though they were heavily insulted by the people on the streets, they held their heads up high and answered back that in a democracy all opinions had a perfect right to be publicly shown… 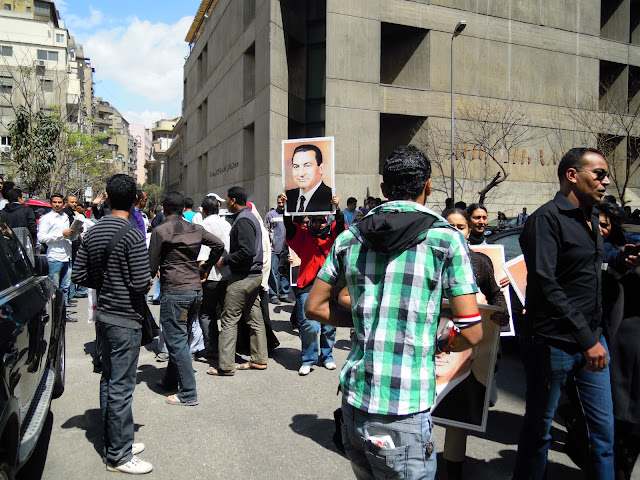